I am very sorry to report that two close family members have had to bid farewell to much-loved feline companions in the last ten days. On December 9, my sister Melissa’s newest kitty, Choo Choo Charley, crossed the Rainbow Bridge at the age of five. He had developed a condition which made it impossible for him to empty his bowels on his own. Despite lots of loving care and veterinary assistance the problem could not be corrected or even improved. 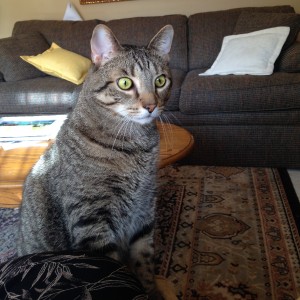 Last night my cousin MJ and I tearfully said goodbye to my “godcat,” Pwitty Girl (more commonly known as PG). PG was MJ’s first pet, a prissy little beauty whose high-stepping curlies (curly paws) always impressed me. She was adopted from our vet in July 2000 at the age of 1 1/2.  A little over three years ago, PG was diagnosed with liver cancer. MJ tenderly nursed and encouraged her, undoubtedly prolonging her life. Until this week, she had been a very enthusiastic diner. She always welcomed me when I came to feed her while MJ was at work, displaying keen interest in the meals I would concoct for her in the kitchen. When she lost interest in food and dropped below four pounds, MJ knew it was time. 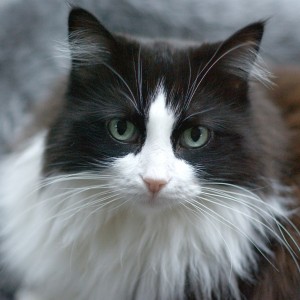 I hope to meet these kitties again one day on the other side of the Rainbow Bridge. In the meantime, these losses make me very sad.

The first Tuesday in December is typically the last night of the Birmingham Bible Institute fall semester, and so it was this year. Students in my Hebrew 7, Greek 7, and/or Greek 3 finished their course(s) with honor. Now it is time to take a break.

I was sorry to bid goodbye to Phil H. a week earlier. Phil took Greek from me when we were still using the first edition of Mounce’s Basics of Biblical Greek, and returned last winter to refresh his Greek skills. He and his wife are moving to Ohio, and I wish them God’s many blessings.

Although I will miss my students for several weeks, I am glad for a chance to rest and renew my strength (Isaiah 40:31). The reduced energy level associated with fibromyalgia tends to get worse with the coming of the winter months, and it is certainly true in my case.

I will also enjoy the opportunity to spend more time with my feline family. Currently numbering eleven, they range in age from 17 (“Googlie Girl”) to 2 (the sisters Jou Jou B, Jolie Fille, and Jenise). Jenise in particular–as the newest member of the family–is still acclimating to her new surroundings and will, I hope, benefit from some extra time and attention from her human mom.

Above all, I am looking forward to celebrating the births of my sister, Melissa, 59 years ago; and my Lord and Savior Jesus Christ, over two millennia ago. I am so grateful for God’s gracious gifts (2 Corinthians 4:6)!

Things are definitely looking up. I am feeling pretty much normal again (thank You, God!) and there’s good news on the “cat front,” which I am celebrating on National Cat Day. Perhaps the story will be more interesting with a little background.

Back in January, when I first met Jou Jou B at Gasow, I was introduced to her two sisters as well. The three cats were strays, whom some “Good Samaritan” had had spayed and ear-tipped. When she could no longer care for these tame kitties, the “Samaritan” took them to Gasow so they could find homes. The sisters were named Jou Jou, Mimi, and Clarisse. Before I officially adopted Jou Jou B, Clarisse–the friendliest of the three–found a home.

After Calleigh duTwain crossed the Rainbow Bridge in June, I started thinking a lot about the remaining sister, Mimi, still at the vet six months later. She was very shy. Jim graciously agreed that we could adopt her. I renamed her Jolie Fille (“pretty girl”).

Fast forward to October…Patch the Pirate was unlucky enough to be “trapped” in one of the cat carriers we leave out to lull hapless cats into complacency. I took her in on a Tuesday for her overdue vaccines and learned that she needed a dentistry. She had to wait until Friday for that procedure, but I did not dare bring her home. I would never have been able to “catch” her again. Although Patch never came out of her carrier or showed any appreciation for my efforts, I visited her every day except the day she had the dentistry (seven more teeth removed…darned cervical neck lesions!).

When I came in that Saturday, Dr. R. mentioned to me that the third sister, Clarisse, had been returned two days earlier by her adopters. She was being picked on by one of their other cats, who had more seniority in the household. One of the cat-loving ladies behind the desk told me that the poor cat looked completely traumatized when she arrived, but was doing better now that she was no longer being tormented.

If you know me at all, you will not be surprised to learn that I immediately began imagining the addition of the third and final sister to our feline family. Jim’s initial response was an emphatic “NO!” I continued to talk about her at home and visit her at Gasow on my trips to visit Patch, who finally came home after a week.

I decided to take a different approach with Jim: “Let’s Make a Deal.” What would he like that I could agree to if he would agree to let me adopt Clarisse? Surprisingly, this method worked; Jim might be interested in joining a fitness club. I introduced Jim to Clarisse on October 23, and we officially adopted her that evening. I chose a name for her that sounded similar to “Clarisse” (pronounced “Clarice,” not “Clarissa”) but started with a ‘J.’ Her new name is Jenise.

The night before my teaching responsibilities at Birmingham Bible Institute began, my throat became quite sore. “Rats!” I thought. “This is the worst possible timing.” I nevertheless did my three hours of teaching and briefly introduced my classes during the Chapel period. The sore throat lasted a little over two days before it turned into a heavy-duty upper respiratory infection.

By the following Tuesday my sinuses were working overtime, and I was coughing endlessly. Sleep was difficult. Thanks to one of my students, I was able to get a cough syrup that really helped. It dried up my system very well, which led to a really awful sinus infection. Thank heavens I had recently had an appointment with my allergist, so I was able to get a five-day course of azithromycin. That was effective in eliminating the sinus infection, but the drainage and coughing returned, although to a lesser extent than before.

It has now been seventeen days, and I think I am finally on the mend. It has been hard to let co-workers and family members down by not being there to do my jobs as I desire to do them. For much of the time, I spent hours in bed, drifting in and out of sleep. I missed church services and being on campus on the deadline date for submission of financial documents for fiscal year 2014 at Wayne State. At home I did my twice-daily cat chores and not much else.

I am a person who values her “down time.” I like spending time at home with family and felines. To live my entire life that way, however, would be the ultimate waste of the time God has given me here on earth. It is important to make some sort of meaningful contribution(s) to others. I am glad to be feeling better and am praying that I will continue to heal so I can soon resume my “normal” schedule of work and worship.